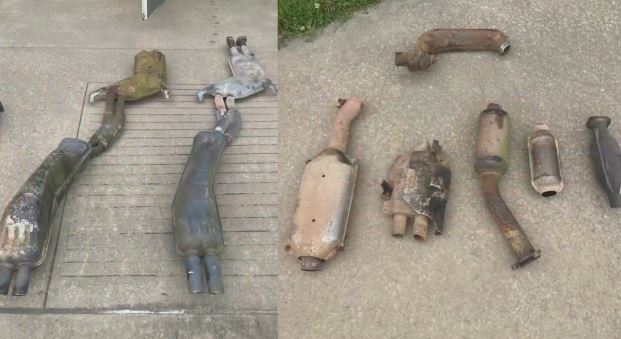 CONWAY, Ark.- Catalytic Converter thefts are spiking all over the nation, especially here in the natural state.

Conway Police Department recently posted pictures on Facebook asking for help finding owners who had their catalytic converter stolen in the last 10 days.

In the post, CPD said in some cases the entire exhaust system was stolen too.

Several people commented on the post saying their car was targeted however it didn’t match the description given by police.

One of the comments belonged to a church that was hit recently.

“We are a church known for giving but in a case like this it wasn’t giving, it was taking,” said Don Chandler, Senior Pastor at Central Baptist Church, “Its a pretty low thing to do, to rob from a church.”Senior Pastor, Don Chandler said their church bus had the catalytic converter stolen during the snowstorm. Candler says in the process of removing the part, a lot of damage was caused.
“It was about 9,400 dollars to fix,” said Chandler.

Catalytic converters are often targeted because they contain precious metals that are valuable. Scrap yards pay between 20 and 500 dollars for the parts.

I called a dozen scrap yards in Central Arkansas, none of them wanted to speak on camera but they did share some information.

One yard said they stopped buying catalytic converters for this very reason.

Another said when they do buy scrap, they document all the seller’s information.

Conway Police sent me almost a dozen reports of convert thefts from this year, many reports say more than one converter was stolen.

Conway isn’t the only department dealing with the thefts.

Faulkner county and Lonoke county both say they have made several arrests this year.

“In front of a good man you could leave something unlocked and completely open, and nothing would go missing. But in front of a bad man, locks and fences and bus barns probably wouldn’t do any good. I think it’s all about what’s inside a person that makes that happen,” said Chandler.

Conway police suggest keeping lights on outside your home to increase visibility and deter criminals.

They also suggest putting a unique marking on your catalytic converter to help with identification if it is stolen.