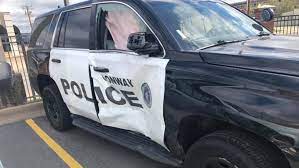 LITTLE ROCK — A Conway police SUV was t-boned by a semi-truck during an early Saturday morning cow rescue, according to the department.

Around 4 a.m., Conway police were assisting Arkansas State Police after a car sideswiped a truck hauling cows causing the initial accident. The cows escaped and had to be rounded up.

Police say traffic was stopped for around four hours. A semi-truck driver failed to stop and slammed into the police vehicle.
No injuries were reported in the crash.
Related Topics:featured
Up Next