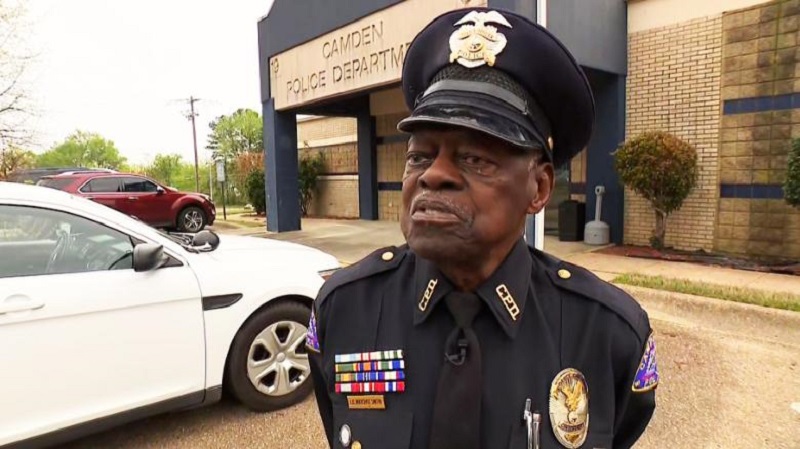 As a teenager, officer Smith was given the nickname “Buckshot”. “14,” said Smith. “This old lady, an old man, named me and said I’m going to call you Buckshot. That’s how I got it.”

According to Smith, as he got older, he knew protecting and serving was his calling, Beginning his law enforcement career in 1958. It was during a time when blacks weren’t seen as equals to their white counterparts, but he upheld the oath coming along with the badge.

According to Officer Smith, now, in his golden years, he leaves the high-speed chases, and the dirty work, to the younger officers, spending most of his day patrolling the community. “I love people, to help people. You can’t make it to heaven without loving your fellow man,” said Smith.

Wherever he goes, someone is sure to stop him with a positive, encouraging word, or a story of how they met. “He’s a saint on top of being a cop and he’s just a good human being,” said Don Banks, Banks Pawn Shop.

“We go way back. He was a union representative at the furniture factory here and I was a union representative at the paper mill, about 1965-66. And I remember we went to an AFLCIO convention in Hot Springs and when I saw him he was dressed immaculate, dressed sharp, and I said me and him are going to run together,” said Robert Earl Garner, Former Ouachita County Deputy Sheriff.

When Officer Buckshot was asked when does he plan on retiring? “When the good Lord is ready to take me, I’m going to retire,” said Smith.

Next month, Buckshot turns 93 and says he doesn’t have a birthday gift in mind, because waking up will be gift enough.

Arkansas could have it’s first case of “Hepatitis X”