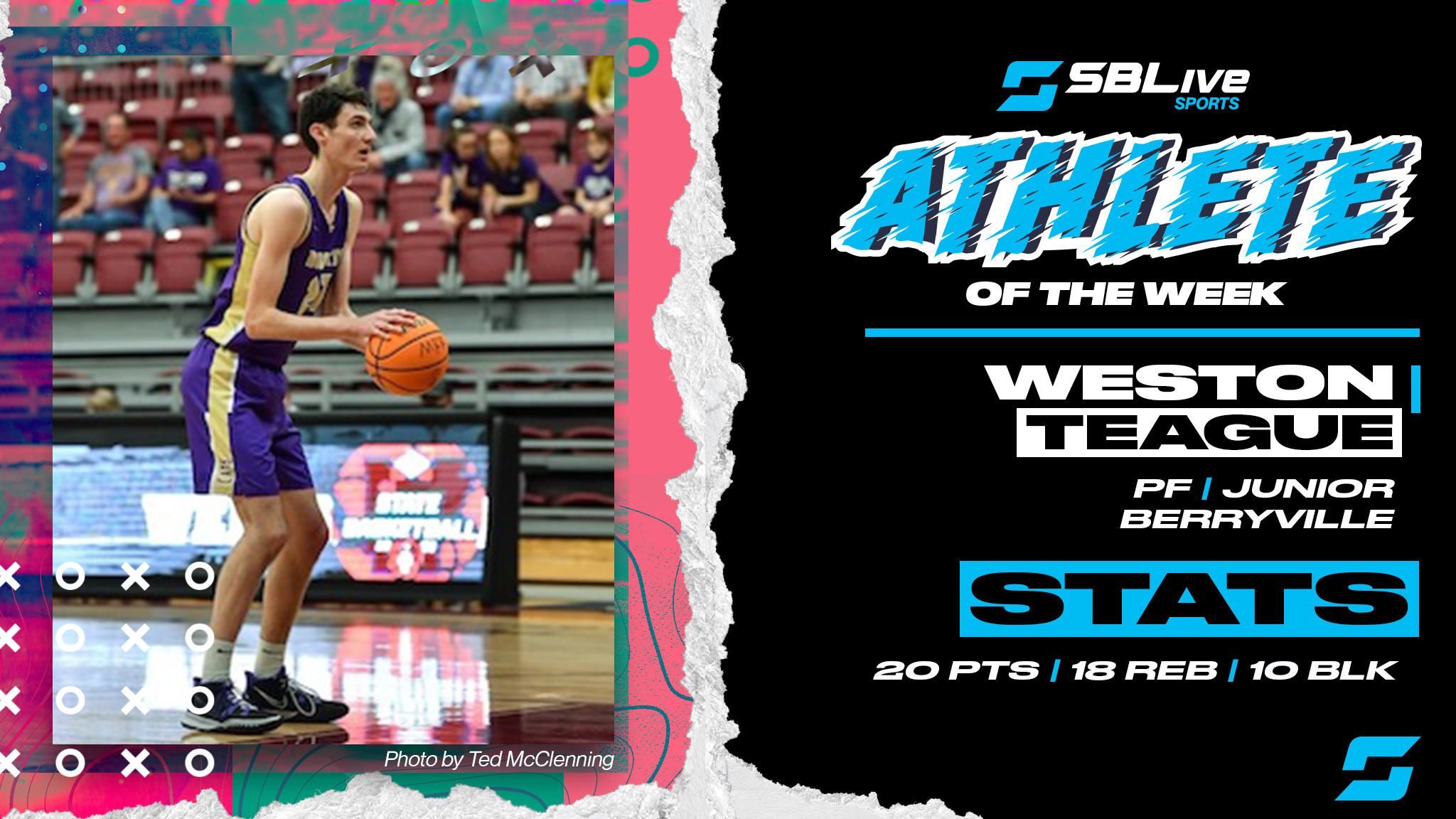 Teague dominated on both ends of the floor for Berryville on Friday, tallying 20 points, 18 rebounds and 10 blocks in a 61-58 loss to Magnolia in the 4A tournament.

Teague ran away with this week’s honor, receiving 74.13% of the total vote.

Here are the other athletes who were nominated for March 8-14:

Tucker Anderson, Bentonville West: Anderson hit five three-pointers en route to a game-high 21 points Tuesday to lead Bentonville West to a 59-56 double-overtime victory over Conway in the 6A tournament.

Riley Buccino, Bentonville West: He made three shots from beyond the arc and led Bentonville West with 17 points Thursday in a 68-46 loss to Little Rock Central in the 6A tournament.

Parker Gordon, Catholic: He had a game-high eight points in Little Rock Catholic’s 36-30 loss to Rogers on Wednesday in the 6A boys tournament.

Ethan Gregory, Mountainburg: He poured in 29 points for Mountainburg in a heartbreaking 66-62 loss to Fordyce on Wednesday in the 2A tournament.

Ty’reonn King, Blytheville: He collected 20 points in Blytheville’s 62-50 win over Watson Chapel in a 4A semifinal Saturday.

Keyln McBride, Jonesboro: McBride made 6 of 11 from three-point range and finished with 23 points Tuesday to lead Jonesboro to a 62-57 double-overtime victory over Jacksonville in the 5A tournament.

Jordan Mitchell, West Memphis: He had a game-high 26 points for West Memphis in Friday’s 76-68 loss to Sylvan Hills in the 5A tournament.

Zac Pennington, Lake Hamilton: He had a team-high 24 points, including six three-pointers, for Lake Hamilton in a 75-65 loss to Parkview in a 5A semifinal Saturday.

Layne Taylor, Farmington: He had 17 points, seven assists, three rebounds and three steals for Farmington in Thursday’s 48-29 victory over Camden Fairview in the 4A tournament.

Kel’el Ware, North Little Rock: He poured in a game-high 28 points, with three three-pointers in the first quarter, to pace North Little Rock to an 87-63 rout of Fort Smith Northside in Saturday’s 6A semifinals.

Terron Williams, Marianna: He tallied 17 points in Marianna’s 67-43 romp over Fordyce in a 2A semifinal Saturday.