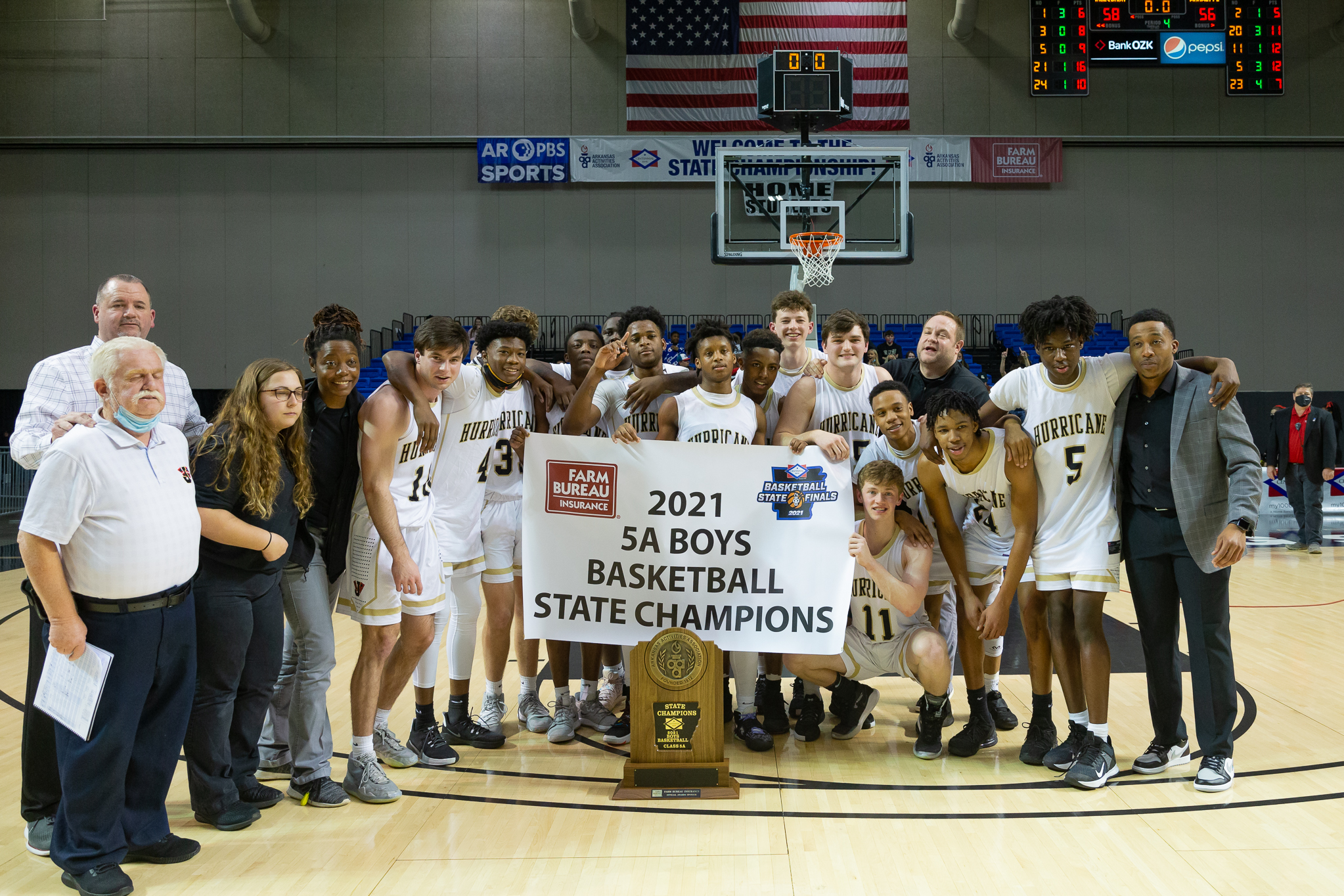 What at halftime appeared to be the most lopsided game of championship weekend turned out to be a thriller.

Maumelle erased most of a 16-point halftime deficit, but Jonesboro held on for a 58-56 victory in the Class 5A boys basketball state final Saturday night at Bank OZK Arena.

“The last couple of years, we haven’t finished (the season) like we want to at Jonesboro,” Hurricane coach Wes Swift said. “I’m not saying we have to finish in the state championship game every year, but we want to put up a fight and play our best at the end of the year.

Swift credited his players for keeping their composure in the second half.

“To get in a game where you have all the momentum in the first half and then get punched in the mouth in the third quarter, and everything is going the other way. … The 16-point lead was down to two in the fourth quarter, and that takes some mental toughness to flip that back around.”

“It’s definitely a great feeling to finish it off like this, especially with it being my last season,” McBride said. “This one is a lot sweeter because like Coach said, the seniors were leading the team this year. In ninth grade, I wasn’t really a leader, I was coming in. It’s just a great feeling to have it come back around and all of your hard work with you and your teammates paid off and you get a ring.”

“I think that is why we are mad or sad,” Maumelle guard Carl Daughtery said. “We came all the way back and couldn’t finish it. We really tried.”

Hornets coach Michael Shook was proud of his team’s resolve.

“We dug ourselves a hole deep early on, and Coach Swift does an amazing job, and they were extremely well-prepared. They out-worked us, out-toughed us and out-rebounded us and out-everythinged us the first half,” Shook said.

“But, the way my guys battled in the second half, they never gave up, and gave themselves a chance. All you can ask for is a chance at the end. I am so proud of them.”

Maumelle (20-6) began the third quarter more determined but still trailed by 10 points with 3:59 remaining in the period.

The Hornets finished the quarter on an 8-0 run. Kaleb Thurman stole the ball and set up a layup by Joshua Denton to cap the spurt, and Maumelle trailed 45-43 heading to the fourth.

Jonesboro (24-3) regained the momentum early in the final period. McBride drilled a three-pointer at the 4:17 mark to put the Hurricane up 54-48.

“We came out and scored the first two buckets of the fourth quarter and kind of got things back,” Swift said. “It was still a good game, obviously, but I thought we were in more control. We lost control of the game in the third quarter, for sure.”

Maumelle had one final charge left. Jaylon Smith hit a three-pointer with 3:24 to play to cut the margin in half.

Two free throws by Jonesboro’s Amarion Wilson widened the gap to five, but highly regarded football recruit Nico Davillier scored in the paint for Maumelle, making it 56-55 with 38 seconds to go.

Maumelle fouled Bradley Richardson with 27 seconds left and Richardson made 1 of 2. Moments later, Rasberry went to the line to shoot two for Maumelle and could have tied the score but missed the second.

Jonesboro’s Jesse Washington was fouled and converted on 1 of 2 free throws, giving Maumelle the ball with five seconds left down 58-56. The Hornets called timeout and inbounded the ball, and Jonesboro, with fouls to give, fouled to set up a sideline out-of-bounds situation for Maumelle at its end.

The ball was inbounded and handed off to Riley Wade, who missed a long three-pointer.

“I am just so proud of these guys,” Shook said. “They have been doing this all year, and they fought and came together, and just like all teams, we had some peaks and valleys, and we had some struggles. But we talked all year about peaking at the right time, and I felt like last week during the state tournament, we peaked at the right time. We started playing good basketball.

“It stinks to lose, but I know there would be 30 other teams in 5A that would trade with us.”