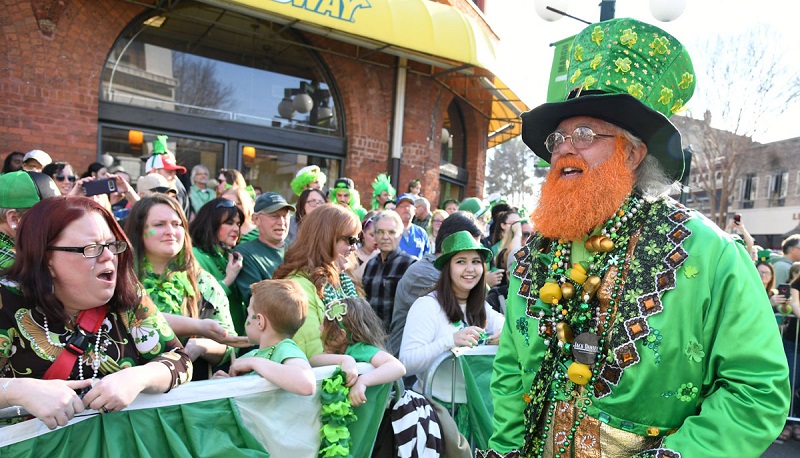 Hot Springs, Arkansas — After the city was forced to cancel it last year due to the pandemic thousands of people showed up for this year’s World Shortest St. Patrick’s Day Parade in Hot Springs.

Filled with live music, celebs like Danny Trejo and Cheech, and of course, the head hog himself – Sam Pittman, along with his wife Jamie.
They said that they were just happy to see the parade back.

“It’s just good overall, not just for Hot Springs but for the state of Arkansas,” Steve Arrison, CEO of Visit Hot Springs said.

In Spa City, many said that the event feels like a whole new parade. “It’s almost like you’re doing a new, you know? We have the largest Irish Pop-Up Pub, we just inflated it and you’re wondering is the air gonna hold,” Arrison said.

Last year saw one of their biggest traditions canceled– the World’s Shortest St. Patrick’s Day Parade. “Yeah, it was terrible. It was canceled like three days before it was gonna happen when all the COVID cancelations happened,” Arrison said.
But, now they’re back and they’re better than ever.

Tony Kirk was there hours before the parade even started. He saved spots for friends that were headed for the parade. “By nature, we’re social animals and we like to get together as a group and while we may have differences in this country, you throw a good party we’ll look past everybody’s differences and have a good time,” Kirk said.

Hot Springs is a tourist destination for a reason. That social interaction is something that the city recognizes as well. “Obviously we’re very thrilled. As you said, our location is prime so that’s exciting too,” Annette DeGraw, a cashier at Joanna A. Boutique said. “COVID has affected everybody, so the fact that we’re able to have this many people here and enjoy and kind of get back to some normalcy is definitely a very exciting thing.”

Everyone is just happy to be back together. “A little icing on the cake as we go into the summertime. Spring Breaks and then summer, there’s really not a down season in Hot Springs anymore which is a wonderful feeling for those of us who live and make our living here,” Arrison said.

The Reform Alliance: $6.3 million is now available to Arkansas students with disabilities