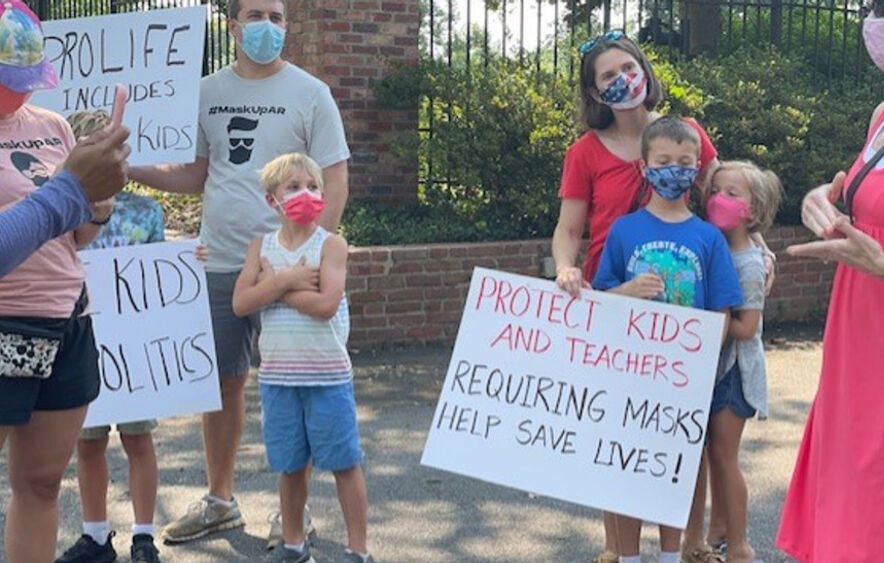 Arkansas – Act 1002, a law that bans masks mandates, is reportedly coming to its end after state officials and lawmakers are under constant pressure in the recent period. The law was put in place in April and prohibits every state institution or private business to put in place mask mandate in Arkansas.

But the Delta variant has changed the game as the recent numbers surge and hospitals are almost full with Covid-19 patients.

The most recent demand to change the law comes from concerned parents asking the governor and the lawmakers to change this law hoping it will help everyone to be as safe as possible from the virus. Dozen parents and community members showed up to the Governor’s mansion Saturday to protest Act 1002.

When the law was initially put into place, the Covid-19 numbers in Arkansas were much lower and the situation seemed stable. But with the very contagious Delta variant, Arkansas adds between 1,000 – 3,000 new cases every day and the situation is nothing but alarming.

A positive vibe over the changing the law was sent last week on Thursday when Gov. Hutchinson declared a public emergency and informed the public that a special session was called and will take place next Wednesday to discuss the Act 1002.

Anika Whitfield, Grassroots Arkansas Co-Chair, said this isn’t the first time this week she’s demanded action on Act 1002. Now she says it should be repealed entirely.

“We have some adults who are throwing a temper tantrum because they had to wear a mask inside of the state capital which is another public building,” Whitfield said. “Mask do not prevent anyone from being able to breathe and do the things that they need to do.”

She called the state officials to act for the people and to put the politics away.

Anna Morshedi, a mother of two, said that her children are going in a private school. One of them is first grade, while the other one is third grade. Just like everyone else, she looks forward to get her life back to normal as soon as possible.

“I know my kids will be at a school who is able to follow the CDC guidelines and the thought that that’s not an option for all children is very upsetting as a parent,” Morshedi said.

“Things have changed since the spring. We’re really in a different situation, so in order to get back to normal, this is the step that we need to do. Masking in schools and getting everyone vaccinated is the only path forward,” Morshedi said.

According to the latest information, lawmakers are about the change the Act 1002.

Marion School Districts informs that at least 7 students and 3 staff members tested positive on Covid-19, 168 students are in quarantine