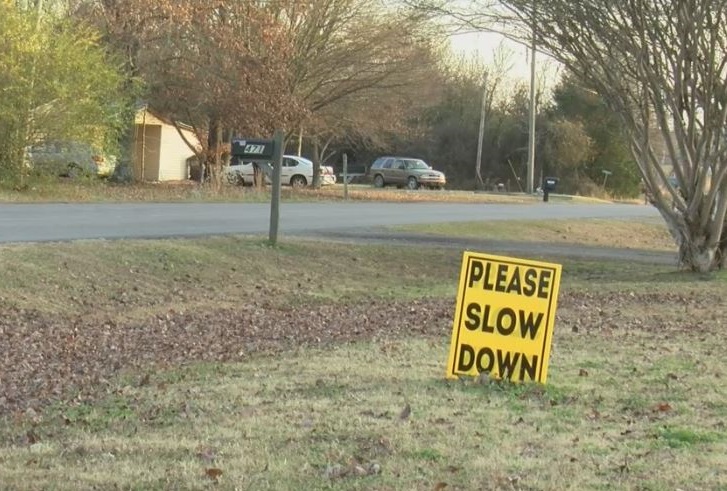 Pottsville, Arkansas – Local residents at one Pottsville street teamed up with the local police department in an effort to make drivers hit the brakes in an area where speeding is nothing but a regular thing on a daily basis.

The speeding issue has been an issue for years, but with the rising population, the issue is becoming much more concerning and the local residents are understandably fearing for their safety.

Chris Alexander, a local who has been living on Pine Ridge Road in Pottsville for 16 years, says that speeding has always been an issue, but in the recent years is becoming real safety concern in the area.

According to him, Pine Ridge Road is a popular route to get to Pottsville schools lined with houses. Most of the speeding comes during school pick-up and drop-off hours, as parents and siblings drive from one Pottsville campus to another.

Alexander says cars are usually driving 15 miles per hours above the speed limit, while their children are playing near the street.

“We just never realized how fast people really went,” Alexander explained. “I just said, we’ve got to do something about it.”

Although the locals requested help from the local police department in multiple occasion during the last couple of years, the issue is still persistent and Alexander decided to take care of the problem himself. That said, his solution is a series of bright yellow signs paid for out of pocket to remind speedsters to hit the brakes, set up along the route and around the neighborhood to catch drivers’ attention.

Pottsville Police say the latest action taken by Alexander is a proactive effort and they believe that working with the residents will bring much better results. Local authorities say they believe the new signs will make drivers hit the brakes and hopefully tragedies will be avoided in the future.

“We are taking this very seriously,” explained Lt. Adam Bryant with the Pottsville Police Department. “The last thing we want to work is a pedestrian vs. vehicle accident.”

Bryant also has a message for those traveling in the area: watch out for the speed limit and hit the brakes if you’re going too fast.

AT7T cell services down in some parts of Arkansas, Jefferson County 911 line not working