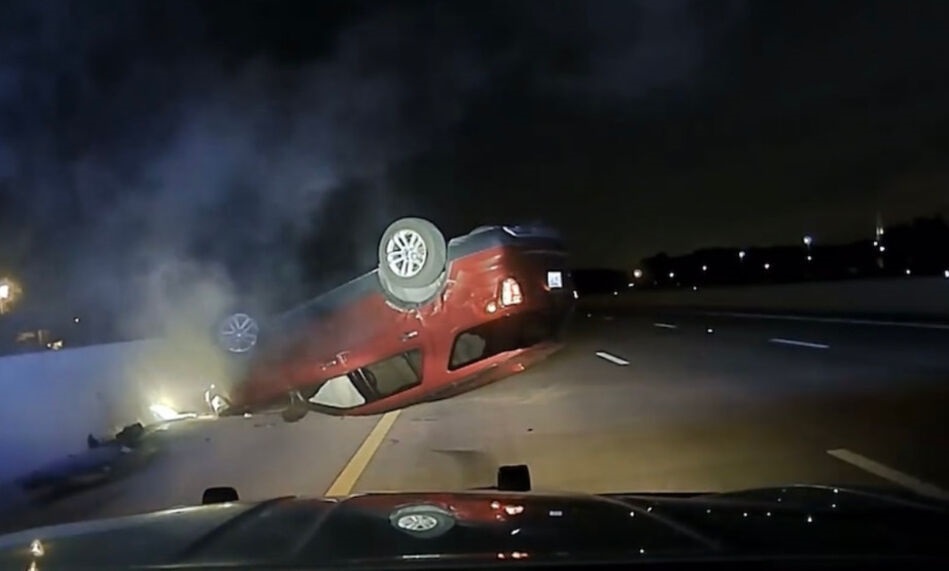 Conway, Arkansas – Woman sues Arkansas Police after her vehicle overturned in what seems to be a pursuit.

The incident happened on July 9, 2020 when then pregnant woman Nicole Harper was traveling south bound on US Highway 67. According to police report, officer Rodney Dunn tried to stop Harper’s vehicle driving 84 mph in 70 mph zone.

In the dash cam footage that went viral recently, it can be clearly seen how the officer flashed and tried to pull her over. When Harper saw the police vehicle, she started moving in the far-right lane with her hazard lights on.

Shortly after she turned her hazard light on, for no reason the officer driving behind performed a PIT maneuver. A PIT maneuver happens when officers try to stop a fleeing vehicle in order the car to turn sideways. However, its clearly that in this occasion PIT maneuver was not necessary. Harper’s vehicle flipped as a result of the PIT maneuver that night.

From what can be heard from the video, officer Dunn asked the woman why she didn’t stop and she replied she didn’t feel it’s safe. Then he asked her if she was the only one in the vehicle of which she replied ‘Yes, I’m pregnant.’

Now Harper is filing a lawsuit against the Arkansas State Police hoping to prevent this from ever happening to anyone else.

Her lawyer, Andrew Norwood, said she was unable to safely pull over her car on the right or left shoulder due to concrete barriers and reduced shoulder. There seemed to be no exits or shoulder for Harper to safely exit.

“The Arkansas drivers manual is written by the Arkansas State Police. On page 3 it breaks down what to do if you’re stopped by law enforcement officers. It breaks down verbatim. It’s like she was reading the textbook as she was doing it and she still ended up upside down on the interstate,” said Norwood.

Harper was rushed to hospital and luckily doctors were able to save her and the baby. It could have been much worse, she added.

Norwood said the lawsuit was filed May 18, 2020 and it could take 1-2 years before it sees a jury trial.

You can watch the video here.

Those experiencing flood damage, please call this number for help

117 people in Stuttgart reported their homes flooded, more to come