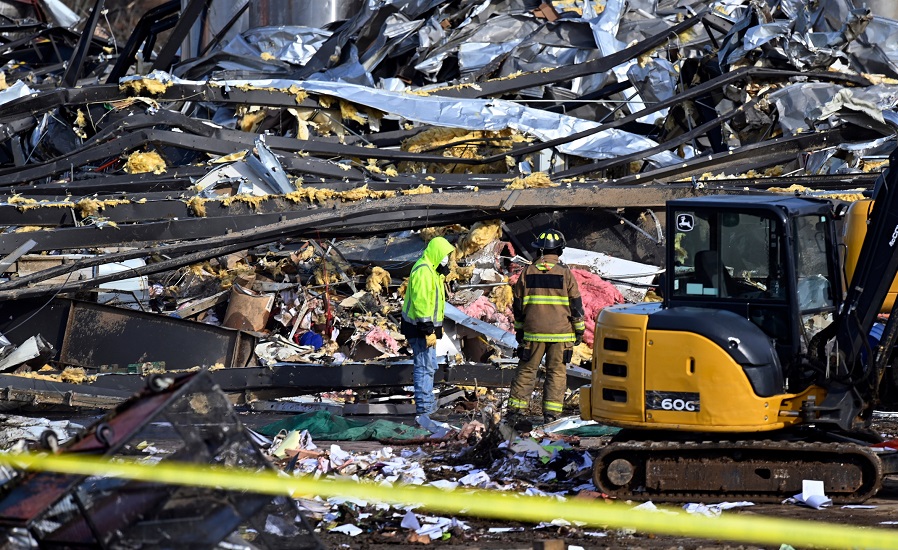 The devastating images this morning is something that one can’t remain calm. Areas is Arkansas, Kentucky, Illinois and Tennessee have been hit by destructive storm that forced many people out of their homes and the situation will be difficult in those areas in the upcoming period. From homes to roads, the most hit areas suffered heavy damages.

In the early morning hours volunteers and the American Red Cross were already at the scenes providing necessary help for the people in those areas. By the afternoon hours, thousands of others were assisting those in need, but it will surely take some time until things start getting back to normal.

The American Red Cross partnered with Nexstar media and opened donation page for those in need. If someone wants to donate money, they should visit this link. Donations can be as low as $10.

At this point it still remains unclear if the storm was the first ever recorded “quad-state” tornado or multiple twisters. In the early morning hours, nearly 50 people were reported dead, but this number increased during the day now reaching nearly 100.

Although it’s too early to estimate the total damage of the storm that started Friday afternoon and lasted until Saturday morning, a huge disruption in the most hit areas is expected in the upcoming period. From electricity and water distribution issues, to heavily damaged houses, building and roads, it will surely take months before everything gets back to normal.

Western Kentucky appears to be hardest hit. On Saturday morning, search and rescue teams were still going through rubble, unable to confirm the number of people who had died.

“We just can’t confirm a number right now because we are still out there working, and we have so many agencies involved in helping us,” Kentucky State Police Trooper Sarah Burgess said.

She said rescue crews are using heavy equipment to move rubble at a candle factory that was struck by a tornado in Mayfield. Coroners have been called to the scene and bodies have been recovered, but she didn’t know how many.

“We believe our death toll from this event will exceed 50 Kentuckians and probably end up 70 to 100,” Kentucky Governor Andy Beshear said at a news conference Saturday. “It’s very hard, really tough, and we’re praying for each and every one of those families.”

In a tweet on Saturday, Joe Biden confirmed that he will make sure that the states that were hit by the storm would “have what they need as the search for survivors and damage assessments continue.”

We will follow the situation. We will update the story as new information are available.

Auto parts and car repairs might force some people not to travel for the holidays, shortage issue hitting the businesses