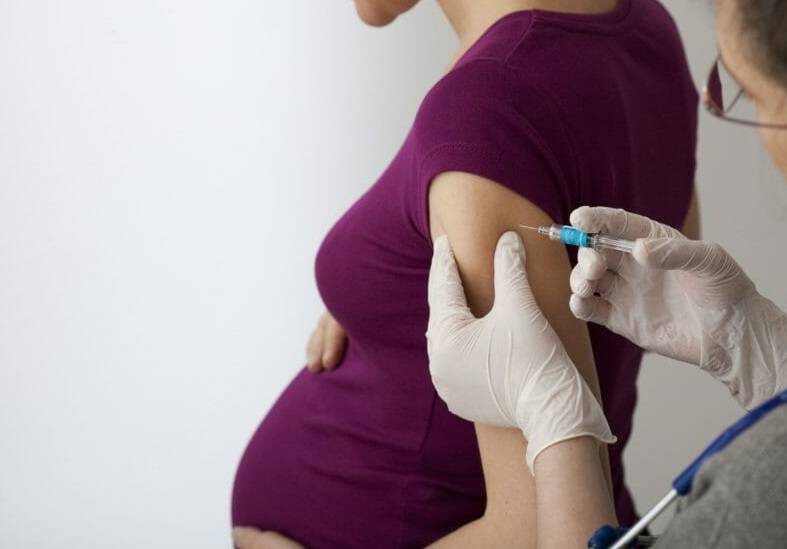 We already know that none of the vaccines around the world is fully approved as none of them has been through the whole process of testing their efficacy and long-term effects on different categories of people. But the pressure of the Covid-19 and the destroying effects to the economies, made the health agencies, including CDC, to authorize the vaccines for emergency use.

And for now, it seems they were right when they decided to approve the vaccines for emergency use since their efficacy against the virus are great despite the fact the Delta variant is infecting even vaccinated people.

But it looks like CDC went too far last Wednesday when they announced new evidence that it said strengthens its recommendation that pregnant people get vaccinated. Initially approved for adults only, CDC at one point few months ago decided to approve the vaccine for children aged 12 or more. But is it worth it to experiment on pregnant women something that is only “authorized for emergency use only”?

This is what CDC announced following their “new evidence:”

“CDC encourages all pregnant people or people who are thinking about becoming pregnant and those breastfeeding to get vaccinated to protect themselves from COVID-19,” CDC Director Dr. Rochelle Walensky said in a statement about the updated guidance.

“The vaccines are safe and effective, and it has never been more urgent to increase vaccinations as we face the highly transmissible Delta variant and see severe outcomes from COVID-19 among unvaccinated pregnant people.”

The mRna vaccines are completely new technology that has never been used before. The latest recommendation from CDC came after additional researches show that mRna vaccines won’t harm the mother or the baby. The recommendation applies for both early and late pregnant woman, CDC said.

CDC went even further with their recommendation claiming their research showed that mRna vaccines are not affecting breastfeeding mothers or people trying to get pregnant. This is part of their announcement:

“In a new analysis of current data from the v-safe pregnancy registry, scientists did not find an increased risk for miscarriage among people who received an mRNA COVID-19 vaccine before 20 weeks of pregnancy. This adds to the growing evidence of the safety of these vaccines,” the CDC said.

According to CDC, almost 2,500 pregnant women were part of the research and they all were before 20 weeks of pregnancy. Generally, miscarriage happens in about 11-16% of pregnancies, the study found miscarriage rates after receiving a vaccine were around 13% which is just in the middle of what is in general population.

What brings the worry when the results seem to be good? The timing. Every time the numbers spike, countries are coming up with new recommendations, lowering age eligibility and restrictions, and United States is not an exclusion. The results of such an ‘easy-to-conduct’ research could have come up months earlier and that’s the only reason people are worried of these strong recommendations.

Up until Wednesday, CDC only said that pregnant women are eligible for vaccination, but now this goes into recommendation backed up with the latest research.

“The benefits of the vaccination strongly outweigh any potential or known risks of vaccination,” Sascha Ellington, an epidemiologist and team lead for the Emergency Preparedness and Response team in CDC’s Division of Reproductive Health, said in an interview with ABC News on Wednesday.

“We haven’t found any risks of the vaccination specific to pregnancy, and we know that if you get COVID in pregnancy you’re at higher risk for getting sicker and having worse outcomes. And so for those reasons you should be vaccinated,” Ellington said.

As of July 31, only 23% of pregnant women received one dose of a vaccine during pregnancy despite CDC efforts to explain them that pregnant women are more likely to be hospitalized and need critical care, including ventilation and admission to the intense care unit (ICU). Furthermore, CDC claims if one gets infected with Covid-19 during pregnancy, it increases the risk for preterm birth of the infants — a birth that is three or more weeks ahead of the expected due date.

With the latest spike in number as a result of the Delta variant, more and more pregnant women end up hospitalized with severe condition, but the numbers are increasing in almost every single category of people despite their vaccination status.

“With such a low vaccine uptake, there’s a lot of room to increase this and potentially save lives, protect women from COVID-19,” Ellington said.

The CDC’s latest research will continue to follow pregnant women and their babies for three months into infancy.

More than 3,500 cases reported in the latest Covid-19 report, third, booster dose of the vaccine is becoming a reality in Arkansas

Booster doses of the Covid-19 vaccines coming in Arkansas, UAMS to offer 3rd dose to some groups of people