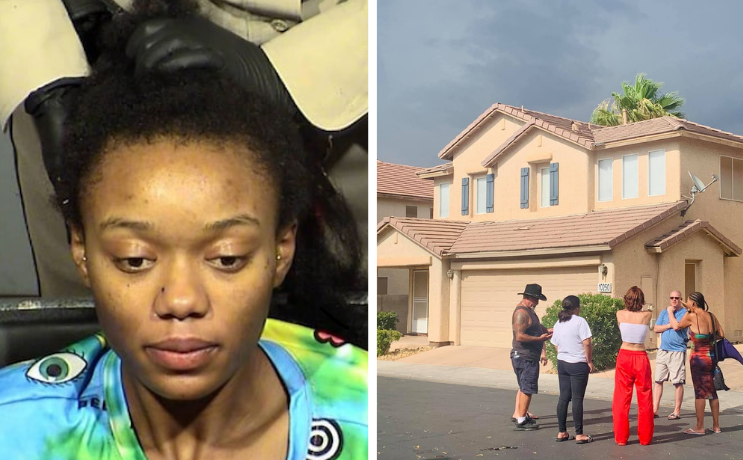 Taking proper daily medications to treat mental health issues is essential and this has been once again confirmed in the case of the 23-year-old mother Taylor who locked her two daughters up in their room without air conditioner reaching three-digit temperature until one of the girls died as a result of the heat.

Luckily, authorities arrived on time and saved the other girl until it’s too late.

The victim, a 5-year-old girl whose identity was not revealed, was locked in the room along with her 2-year-old sister for undisclosed period of time but enough to be fatal for any person, police say.

The mother K. Taylor was known to suffer mental illness and she was prescribed a proper medication to treat it, but she reportedly didn’t take any medicine for some time. Knowing her condition, authorities were performing welfare checks regularly and not a single issue has even been reported. The 23-year-old mother was single and she has been looking over her two daughters on her own.

Right after the incident, the woman was arrested and charged with multiple charges including murder and child abuse charges after her daughter’s body was discovered in the family’s stifling home.

Less than two weeks prior the officers’ discovery, they went for a welfare check when an acquaintance reported that Taylor made a “vague suicidal threat.” According to the acquaintance, Taylor reportedly said she is about to quit her job and watch news and arrest report shows.

The initial welfare check was not successful since the mother and her children were not at their home when officers arrived at their house in Nevada, but a few days later when a neighbor saw their entrance door open, called the police again.

When authorities arrived, Taylor meet them in front of the house and said her two daughters are in their room together watching cartoons. However, she didn’t look convincing and officers asked to check on the children.

As soon as the officers entered the house, they noticed that the air conditioning was not turned on and the temperature was inconveniently high. In the police report that the officers filed that day, they said that the thermostat indicated it was 95 degrees inside.

When Taylor took the deputies in the children’s room it was already late, the 5-year-old was lying on the bed unconscious and she was pronounced dead. The police said the thermostat showed 101 degrees at the time when they entered the room and the humidifier inside was also set to its maximum setting.

The 2-year-old girl who was together with the victim in the room was alive, transferred to hospital for additional examination and discharged from hospital the next day in good health condition.

Taylor was arrested and taken to custody where she was additionally questioned about the whole incident. The police said Taylor made unprompted statements to investigators, making spontaneous utterances such as ‘it was a necessary sacrifice” and “it had to be done to fight bad spirits in the house.”

Locals from the same neighborhood where Taylor’s house was located, confirmed they had issues in the past few months with her. They said that she scratched their cars multiple times and, in several occasions, she would start shouting at them for no apparent reason. Her behavior was everything but normal, they added.

Taylor was charged with murder and two counts of felony child abuse.

The woman initially refused to enter a guilty plea for all the charges and court hearing was scheduled for two weeks later.

“I will hurt your dad very bad,” mother tells children while she drives them at their aunt’s house, shoots their father to death and gets 5 decades in prison